Today, the FROB has formalised its acquisition of 4.24% of Sareb’s share capital increasing its shareholding to 50.14% and taking effective control of the company as per Royal Legislative Decree 1/2022.

As a result, Sareb has amended its articles of association to reflect the new shareholder structure and formalised the exit of the proprietary directors representing private shareholders.

With this new shareholder structure, the Sareb Board of Directors has today named Javier Torres, until now proprietary director representing the FROB, the company’s new executive chairman, replacing Javier García del Río, who has resigned from the position for personal reasons.

Javier has agreed to remain involved in the company as managing director, alongside the executive chairman, thereby helping it to achieve the objectives set out for the company.

Javier Torres forms part of the High Corps of Spanish State Economists and Trade Experts, benefitting from a wealth of experience in both the public and financial sectors. From 2017 to 2019 he was the director of Resolution and Strategy at the FROB. Prior to that he worked at Banco Santander, where he held various positions in the Risks department, Treasury, in the industrial group, in the Wholesale Bank – alongside the vice chairman – and in the leasing, confirming and factoring subsidiary companies.

He also worked at ICEX, in the San Sebastián Regional Economics and Trade Management team and has lectured on Microfinance in the Economics Faculty of the Universidad Complutense.

Today’s board meeting also formalised the exit of the board members representing private shareholders, such as Javier García-Carranza Benjumea and Jaime Rodríguez Andrade in representation of Banco Santander and Jorge Mondejar López who represented Caixabank. Enric Rovira, who was a board member in representation of Banco Sabadell, resigned several days ago owing to his current leave of absence in the bank.

A further two non-executive directors – Francisco Javier Bartolomé and Iñaki Goikoetxeta – have also left the board having reached the end of their five-year mandate. 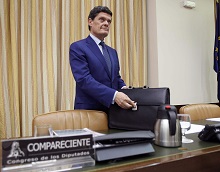